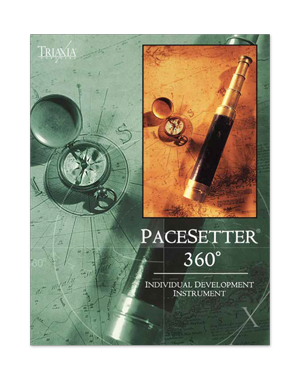 Frequently Asked Questions about the PaceSetter 360°

What level of management does this 360° assess? Do you have different 360° review forms for each level, and if so, please explain.

The focus of this particular 360° is on leadership. It is designed to encompass the leadership from the level of a CEO of a major company to a department leader four levels lower in the organization.

We have several clients for whom we have developed non-managerial 360° instruments. Recently, we implemented a 360° assessment for a large group of engineers, scientists, and technical project managers who were individual contributors and not in a leadership role for the client company.

We have the ability to design 360° assessment instruments for any position or function at any level in a corporation and tailor that instrument so that it reflects the terminology, the culture, and the norms of that organization.

We design 360° assessments for specific functions. For example, some companies have large sales organizations and, in many cases, the factors you would use to assess the skills, behaviors, and attitudes of sales people would differ considerably from those you would use in the more traditional line organization.

What specifically does the 360° assessment tool assess/measure?

Because we tailor our instrument on a client-by-client basis, we measure many different things; but, for the most part, our focus is on organizational leadership. When designing assessment instruments that are more functional in nature, we stress the skills important for that function. We often insert client-specific factors or tailor and adapt ours to better reflect the client culture.

Yes. In fact, we encourage it. Completing it online allows clients to have as many raters as they desire without increasing the cost. Secondly, it keeps the cost of a very sophisticated instrument to a minimum. Finally, we have discovered that when a survey instrument is administered online, the number of comments made on a question-by-question basis is much greater than if the raters were filling out a paper form. Many 360° participants find the anecdotal comments to be very powerful in providing insight, explanation, and color to the more quantitative data.

In delivering the 360° online, we often design a web page that mimics the client home page so that participants feel that they are on the company website. They are unaware that they are on a Triaxia Partners server. The report is printed with the client logo and graphics. If we asked the participants who produced the 360°, they would assume that it was their employer.

Some clients prefer to clearly communicate that the survey is done by a third party to convey a sense of objectivity and confidentiality. Those clients are run through another Triaxia server (Surveycenter.com). This site projects an objective and somewhat neutral tone without any distinctive branding that would detract from the administration of the assessment.

What is the cost of doing the 360° review online, compiling the information, and then creating a report?

The pricing can be broken down in several components: adaptation, setup, and price per book.

Who should deliver the feedback?

We strongly believe that whoever delivers the feedback needs some experience and training in doing so. However, many of our clients have HR staff who are capable of facilitating the feedback. If training is needed, we provide a workshop for HR staff and line managers in how to provide assessment feedback as well as coaching skills to help participants apply the insights they get from the 360° into their day-to-day work.

Many clients prefer Triaxia consultants to provide the feedback to those receiving assessments. We have a number a seasoned facilitators and executive coaches who are highly proficient at providing such feedback.

Do you have a set of competencies in place for your 360° review form, or do we get to choose what competencies we want to use?

A continuum of possibilities exist, depending on the degree to which you desire to tailor the instrument and assessment factors. We work with clients along the entire continuum. Below are a few examples.

We are willing to serve clients at any point on this adaptation continuum. Our preference is that all 360°s be tailored to some extent to reflect the terminology, the culture, and any unique factors that the client feels are important in defining success with their leaders.

Do you allow any customization on your 360° review form? For example, if we had an extra competency we would want to add that was job specific, what is the cost for that?

Yes. The costs depend on the degree of adaptation. Minimal adaptation usually incurs little, if any, additional costs.

Some clients want to add a specific factor (category group of questions, e.g., foundational skills) and list specific job competencies under that for that function (e.g., marketing, sales, accounting, manufacturing, etc.). We are delighted to incorporate that as an additional factor with its supporting descriptors and generally charge no more than the normal setup cost that we would charge for any 360°. Again, our preference is to help the client tailor the instrument to the greatest extent possible.